Grand chef Tom Aikens is pictured above with his partner Justine Dobbs-Higginson. The twice-married chef is a familiar face to viewers with appearances on shows such as Great British Menu

As a new restaurant from one of Britain’s top chefs, it has already received a lot of media coverage.

But DCustomers who plan to try out Tom Aikens’ latest business, Muse, will wonder what the menu actually has to offer.

In what must be Britain’s most pretentious menu contender, the tiny restaurant in Belgravia, central London, gives only vague hints about the food.

Instead of conventional names for each of the ten dishes on the £ 145 tasting menu, Aikens gives them titles like ‘Just down the road’, ‘The love story continues’ and – puzzlingly -‘ Wait and see ”.

Each dish has an explanatory paragraph – which the chef describes as his “gastronomic autobiography” – but the flowery text is scant on the details, leaving diners to guess whether it’s meat, fish, or poultry.

While ‘surprise’ dishes have been a staple among trendy restaurants with high-end tasting menus, the take of Aikens represents a new twist. 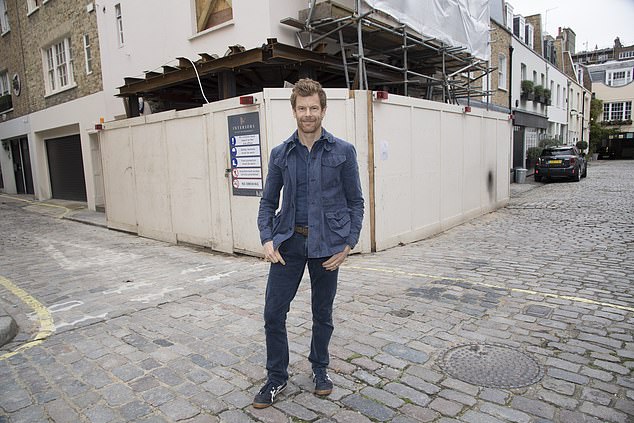 The restaurant, which opens its doors in the new year, has only five tables and can seat 26 guests. The good news is that once they’re seated, more information will be available. Tom Aikens is pictured above outside the restaurant under construction in October

The opening course, “Forever picking”, is about as self-explanatory as the menu is.

Promising ‘seasonally inspired’ snacks, the course is said to ‘stem from my memories of being in the garden with my mom and picking whatever was edible’.

But all that a dish named “We all have our“ Beech ”moment entails is guesswork. Aikens says he’s inspired by a childhood memory of climbing a tree.

“The essence” promises to take a single ingredient, “to research its essence, then develop a truly refined and unique taste.”

According to Aikens, the flavor in question – whatever it is – is one of his favorites.

The menu preamble informs diners that the chef’s inspiration was growing in Norfolk.

“Since my early childhood, I have always been captivated by the unknown, the guessing game, receiving a surprise that leaves you speechless,” writes Aikens.

In addition to the ten-course menu for £ 145, a six-course version for £ 95 and a three-course lunch version for £ 50 will be available.

‘In this menu, you will therefore find some clues and anecdotes about what will be served to you, which resonates with my journey both in my life and in my career.’

In addition to the ten-course menu for £ 145, a six-course version for £ 95 and a three-course lunch version for £ 50 will be available.

Anyone with dietary requirements can notify the restaurant in advance. No details of the accompanying wines have been revealed.

Aikens, 49, became the youngest Briton to hold two Michelin stars when he was just 26.

The twice-married chef is a familiar face to viewers with appearances on shows such as Great British Menu.

Muse – the name is a pun on his setting in a tiny mews house – is his first upscale restaurant to open since his business empire collapsed in 2008.

Explaining the thought behind his “gastronomic autobiography” he told the London Evening Standard: “It will be the sum of all the trips I have had and all the lessons in life that have brought me to this place of rest. The idea at Muse is that it’s not just a place to eat, but from the moment you walk in, you’re on a trip. ‘

The restaurant, which opens its doors in the new year, has only five tables and can seat 26 guests.

The good news is that once they’re seated, more information will be available.

Laura Thompson, Aikens Business Development Manager, said: “The menu offered in the evening will highlight three of the key components of each dish.”

Aikens’ old restaurant empire came into operation in 2008, leaving only the brasserie-style Tom’s Kitchen in Chelsea.

Through Yolisa Tswanya Sep 20, 2016 Share this article: To shareTweeterTo shareTo shareTo shareE-mailTo share Cape Town – The SA Human Rights Commission received a complaint about a sign outside the Liquorice & Lime restaurant in Kloof Street, Gardens, which read: “Eating two slices of bacon a day for breakfast reduces your consumption by 100%. […]

Photography: Shutterstock Menu price inflation hit a 39-year high in November as skyrocketing labor and food costs led restaurants across the country to increase their fees for customers. The out-of-home food index rose 0.6% in November and 5.8% in the same period a year ago, the US Bureau of Labor Statistics said on Friday. This […]