The chicken nuggets that American startup Eat Just created in fermentation tanks will soon be available at a restaurant in Singapore, as the world’s first lab-grown meat to be approved for sale.

Described by the company as a “breakthrough for the global food industry,” it paves the way for Eat Just chicken bites and other “cultured chicken formats” to be offered at a partner restaurant in Singapore in a near future. This makes Singapore the first nation to grant regulatory approval for cultured meat.

Laboratory-grown meat, also known as clean meat, does not consist of dead animals but cells taken from living animals, which are then made into a meat product in a laboratory.

The move comes after a two-year approval process, in which Eat Just completed more than 20 production runs in a 1,200-liter bioreactor to prove it could manufacture its farmed chicken to quality standards. and consistent security.

According to the company, tests revealed that the farmed chicken had an “extremely low and significantly cleaner” microbiological content than the real chicken, which may contain bacteria transferred from the gut, skin and legs of the animals. birds. 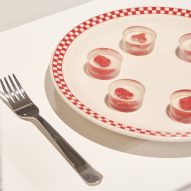 An independent panel also assessed the nutritional value of the meat, judging it to be high in protein and low in saturated fat, just like regular chicken.

The company is currently working with a local restaurant to develop a menu and sides for cultured chicken, which is expected to be priced on a par with “premium chicken in a high-end restaurant”.

Other food technology companies are also aiming to commercialize cultured meat. Rival Israeli startup SuperMeat last month opened what it calls the world’s first cultured meat restaurant in Tel Aviv. His lab-grown chicken is being offered free to diners in exchange for feedback, as it has yet to be approved for sale.

The alternatives come as the consumption of meat continues to increase. It is expected to increase by more than 70 percent by 2050, despite the fact that raising livestock for the meat and dairy industry already accounts for 14.5 percent of annual greenhouse gas emissions. in the world, as well as the consumption of natural resources such as land and water.

“By working in partnership with the wider agricultural sector and forward-thinking policymakers, companies like ours can help meet the growing demand for animal protein as our population reaches 9.7 billion by 2050” said Josh Tetrick, co-founder and CEO of Eat Just.

Supporters of the burgeoning cultured meat industry argue that it is able to produce a comparable product in a more sustainable and cruelty-free manner as it almost entirely eliminates the need to feed, water and slaughter. animals.

Cultured meat requires 99% less land use than conventional meat production, as well as water consumption and greenhouse gas emissions, according to a study published in the journal Environmental Science & Technology. ‘to 96% lower depending on the type of meat. .

As lab-grown meat is currently produced on such a small scale, it still requires more energy than raising poultry. But the hope is that this will be alleviated with the shift to mass production. 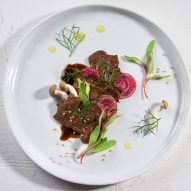 Industry critics also point out that cultured meat, including the version that has been approved by the SFA, relies on fetal bovine serum (FBS) as a high protein supplement to turn animal cells into a product. edible.

FBS is derived from the blood of a fetal calf, normally after its mother has been slaughtered for human consumption, which means that the process of producing the meat is not entirely humane or slaughter-free, although much of the serum is removed by the harvesting and washing process.

A spokesperson for Eat Just told Dezeen that the company had already developed a recipe for “animal-free” nutrients to nourish harvested cells and successfully created cultured chicken using this formula. But that will have to go through a similar regulatory approval process before it can be sold to the public.

In a playful critique of the cultured meat industry’s use of FBS, a group of American scientists developed a concept for a do-it-yourself human steak kit called Oubouros Steak, in which animal cells are substituted. to those of the restaurant. Industrial designer Grace Knight, who worked on the project, told Dezeen it was “technically” not cannabilism.

What’s on the menu of the Middle Eastern restaurant

“How would you like your tenderloin to be cooked?” “ Now, there’s a question you wouldn’t expect to hear at the counter of a gyroscope store. Especially when the filet mignon comes to you in a Styrofoam container with plastic forks and a water bottle for the road. But Mohammad Menassera is a detailed waiter, […]

By Amy Song Posted: December 17, 2021 Sign up to receive the IMF dailyLead today, for free. This week’s top 10 were school nutrition, catering, food retail and CPG news, with school nutrition news being widely read and taking three spots on the list. The most read was news about sschool food service directors who […]

How to navigate a modern restaurant menu

All the menus used to look the same: a declaration of starters, soups and salads, the prelude to the starters, the main event. More and more restaurants are now adopting a new approach. They can start with a snack list, aimed at customers who stop just for a drink at the bar or a cocktail […]